Asian and Pacific Islander communities are numerous and diverse, and API LGBTQ (Lesbian, Gay, Bisexual, Trans/Transgender, Queer) communities carry all of the same diversity while adding overlapping complexities from their LGBTQ communities. Queer and trans people have existed throughout time, and are not a product of the modern era. Terms for LGBTQ communities in Asia and the Pacific include fa’afafine in Samoa and American Samoa, fakafefine (also fakaleiti) in Tonga, Māhū in contemporary Hawaiian culture, ‘tomboy’ and bakla in the Philippines, and kathoeys or ‘ladyboys’ in Thailand. In South Asia, India’s 4,000-year-old transgender and intersex community use hijra — as do those in Nepal, Bangladesh and Pakistan (where khwaja sira is also used). We use the term LGBTQ to refer broadly to communities formed around non-heterosexual or non-binary gender identities, while recognizing that not all of these communities would identify with the more contemporary LGBTQ moniker.

For examples of terms related to gender identity and sexual orientation, such as intersex, genderqueer, and nonbinary, see PFLAG’s National Glossary of Terms.

This report summarizes and synthesizes discussion from a roundtable on GBV in Asian, Middle Eastern, Native Hawaiian, and Pacific Islander LGBTQ communities, convened by API-GBV in September 2019. Attendees discussed how gender manifests as a site of oppression for API LGBTQ individuals, and strategies to address violence in API LGBTQ communities.

Domestic violence in heterosexual relationships, particularly within Asian communities, generally reflect heteronormative patriarchal power dynamics where men are most frequently the abusers — complicated by the added dynamic that women perpetrators of family violence target other heterosexual non-intimate women in the family. In same-sex relationships, advocates must carefully assess for risk and power dynamics to identify lesbian/bi/trans women survivors and gay/bi/trans men survivors (clearly, masculinity cannot be read to signify who the abuser is). This is especially important because so many LGBTQ people’s lives and choices often challenge notions of gender, sex, and sexuality. Instead, an understanding of control, exploitation and other harmful tactics is required to recognize patterns of abuse.

The Primary Aggressor Assessment Tool (consisting of instructions and worksheets) was developed by the Northwest Network to help advocates determine whether there is a pattern of power, control and exploitation within a relationship, and which partner is establishing systematic power and control. 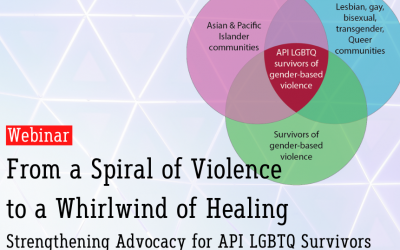 From a Spiral of Violence to a Whirlwind of Healing: Strengthening Advocacy for API LGBTQ Survivors

Domestic violence and intimate partner abuse have often been understood in terms of men’s violence against women. However, lesbian, gay, bisexual, transgender and queer-identified individuals consistently experience intimate partner violence at similar rates as heterosexual women. With 21-55% of Asian women reporting experiences of intimate physical and/or sexual violence during their lifetime, the implications for LGBTQ API individuals are extensive. Yet while the number of anti-violence programs serving Asian and Pacific Islander communities has grown considerably over the last decades, there is little research and still very few culturally-specific resources for LGBTQ survivors of gender-based violence.

This webinar will offer a framework for understanding Asian and Pacific Islander LGBTQ experiences of gender-based violence, and the multiple barriers that these survivors face when seeking support. Integrating highlights from the Institute’s September 2019 Roundtable on API LGBTQ communities, this presentation will provide ideas and recommendations for organizations to engage and serve API LGBTQ survivors more effectively.

This report summarizes a presentation by Grace Poore, Regional Program Coordinator for Asia and the Pacific Islands at Outright Action International. The presentation and following Q&A set the context of struggles and activism for LGBT rights in Asian countries, and includes critical analysis, research, discussions among activists, backlash and its impacts, societal contexts, and movement strategies infusing the work for LGBT rights and safety in Asia. 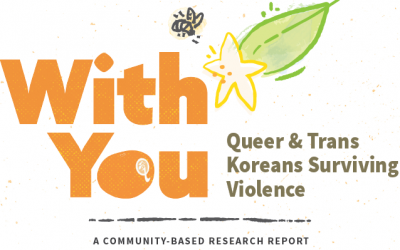 With You: Queer and Trans Koreans Surviving Violence: A Community-Based Research Report, 2018

By the Korean American Coalition to End Domestic Abuse
This report is an effort to document and reflect on the experiences of queer and trans Korean survivors of family or intimate partner violence. It shares key findings of the Queer & Transgender Korean American Survey on Family and Intimate Partner Violence in Our Community, as well as two in-person focus groups. 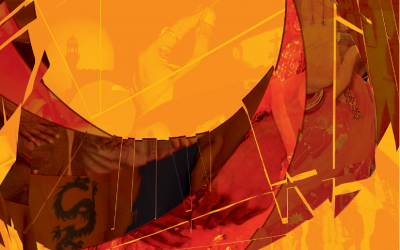 Violence: Through the Lens of Lesbians, Bisexual Women and Trans People in Asia, 2014

Conducted by Outright International, this five-country study (Sri Lanka, Philippines, Pakistan, Malaysia, and Japan) confirmed the existence of complex layers of intersecting discrimination where violence against LBT individuals was not only motivated by rejection of sexual orientation, gender identity and gender expression but, in many instances, also other identity markers; and how LBT individuals were punished by their families and communities for “betraying” their heritage, religion, and culture.

Northwest Network of Bi, Trans, Lesbian and Gay Survivors of Abuse: increases communities’ ability to support the self-determination and safety of LGBT survivors of abuse via education, organizing and advocacy through technical assistance, training, and resources, including twice a month webinars, the Information Clearinghouse on Violence & Abuse in LGBTQ Communities, and a library of advocacy resources

Brown Boi Project: a community of masculine-of-center womyn, men, two-spirit people, transmen, and allies committed to changing the way that communities of color talk about gender

Community United Against Violence: works to build the power of LGBTQ communities to transform violence and oppression, supports the healing and leadership of those impacted by abuse, mobilizes communities to replace cycles of trauma with cycles of safety and liberation, and works to create truly safe communities where everyone can thrive

Human Rights Campaign Foundation: Coming Home to Islam and to Self (2015): a guide aimed at LGBTQ American Muslims who are on the journey toward living fully in their sexual orientation, gender identity and expression, and in their faith and its traditions

South Asian Network: No More Denial! Giving Visibility to the Needs of the South Asian LGBTIQ Community in Southern California (2010)

Kanuha VK. 2013. Relationships So Loving and So Hurtful: The Constructed Duality of Sexual and Racial/Ethnic Intimacy in the Context of Violence in Asian and Pacific Islander Lesbian and Queer Women’s Relationships. Violence Against Women. 19(9): 1175-96.

National Coalition of Anti-Violence Programs: empowers LGBTQ and HIV-affected communities and allies to end all forms of violence through organizing and education, and supports survivors through counseling and advocacy

National Council on Elder Abuse: Mistreatment of Lesbian, Gay, Bisexual, and Transgender Elders (2013) research brief synthesizes the latest available information and research on the occurrence of abuse, isolation as a risk factor, issues affecting help-seeking, and tips for working with LGBT elders

Northwest network of Bi, Trans, Lesbian and Gay Survivors of Abuse: increases communities’ ability to support the self-determination and safety of LGBT survivors of abuse via education, organizing and advocacy through technical assistance, training, and resources, including twice a month webinars, the Information Clearinghouse on Violence & Abuse in LGBTQ Communities, and a library of advocacy resources