Gender violence is perpetuated by cultural beliefs and norms based on the devaluation of women; and legitimized, obscured or denied by familial and social institutions. Abusive acts are typically characterized as horrible or tragic events, as resulting from bad luck or bad judgment, or as being in the wrong place at the wrong time; when in fact gender violence is a historical, universal problem. It is often experienced in the context of additional oppressions based on race, ethnicity, age, sexual orientation, gender identity, type of labor performed, level of education, class position, disability, and/or immigration or refugee status.

Violence against women and girls occurs across the lifecourse. It employs a constellation of physical, sexual, economic, and emotional abuses that establish a climate of fear and result in severe physical and psychological injuries. It is the most extreme expression of sexism and misogyny; accompanied by gendered harms that leave women and girls bearing the socio-cultural burdens of shame, humiliation, and victim-blaming.

And yet, cultures of resistance spring up continually to counter cultures of violence. Survivors, victims, families, communities, anti-violence advocates and social justice activists engage in resistance, community organizing and changing cultures of patriarchy to build violence-free lives and establish equity and gender democracy.

Click each topic below to read about our analysis on: 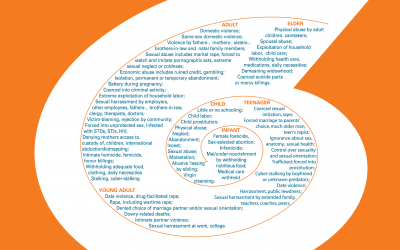 The Lifetime Spiral reveals patterns of victimization by enumerating the types of violence, vulnerabilities, and harms women and girls face.