Remembrance and Solidarity: API-GBV’s Statement on the One-Year Anniversary of the Atlanta Spa Shootings 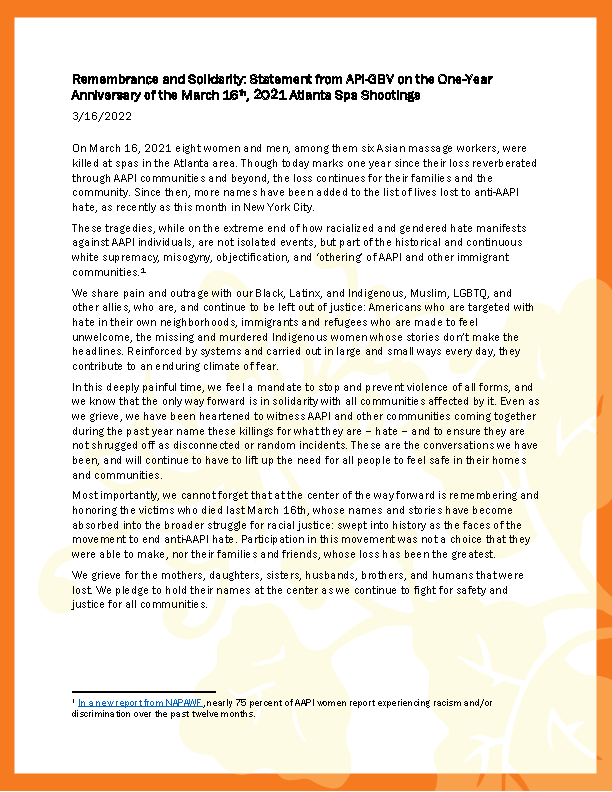 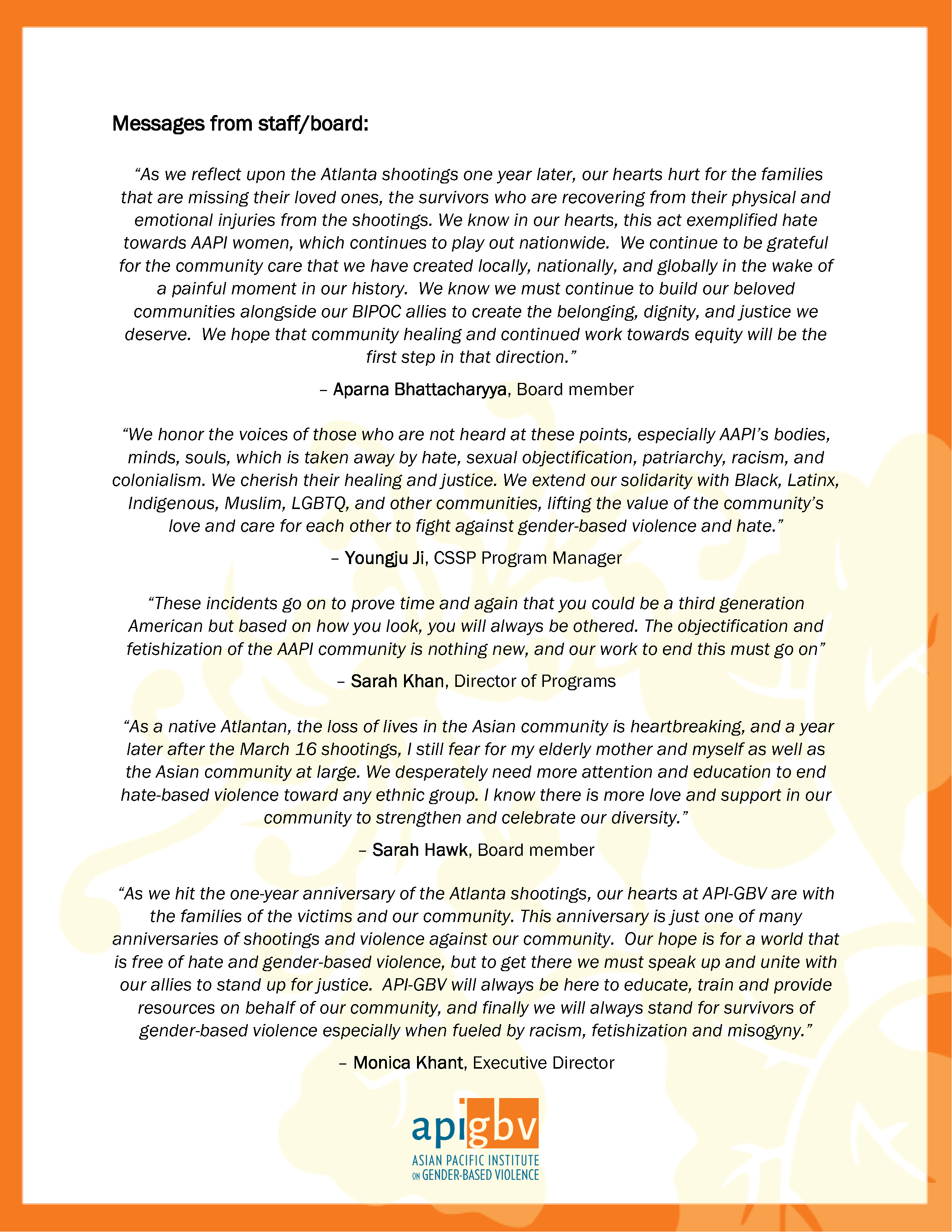 Click above to view this statement as a PDF

On March 16, 2021 eight women and men, among them six Asian massage workers, were killed at spas in the Atlanta area. Though today marks one year since their loss reverberated through AAPI communities and beyond, the loss continues for their families and the community. Since then, more names have been added to the list of lives lost to anti-AAPI hate, as recently as this month in New York City.

These tragedies, while on the extreme end of how racialized and gendered hate manifests against AAPI individuals, are not isolated events, but part of the historical and continuous white supremacy, misogyny, objectification, and ‘othering’ of AAPI and other immigrant communities.[1]

We share pain and outrage with our Black, Latinx, and Indigenous, Muslim, LGBTQ, and other allies, who are, and continue to be left out of justice: Americans who are targeted with hate in their own neighborhoods, immigrants and refugees who are made to feel unwelcome, the missing and murdered Indigenous women whose stories don’t make the headlines. Reinforced by systems and carried out in large and small ways every day, they contribute to an enduring climate of fear.

In this deeply painful time, we feel a mandate to stop and prevent violence of all forms, and we know that the only way forward is in solidarity with all communities affected by it. Even as we grieve, we have been heartened to witness AAPI and other communities coming together during the past year name these killings for what they are – hate – and to ensure they are not shrugged off as disconnected or random incidents. These are the conversations we have been, and will continue to have to lift up the need for all people to feel safe in their homes and communities.

Most importantly, we cannot forget that at the center of the way forward is remembering and honoring the victims who died last March 16th, whose names and stories have become absorbed into the broader struggle for racial justice: swept into history as the faces of the movement to end anti-AAPI hate. Participation in this movement was not a choice that they were able to make, nor their families and friends, whose loss has been the greatest.

We grieve for the mothers, daughters, sisters, husbands, brothers, and humans that were lost. We pledge to hold their names at the center as we continue to fight for safety and justice for all communities.

“As we reflect upon the Atlanta shootings one year later, our hearts hurt for the families that are missing their loved ones, the survivors who are recovering from their physical and emotional injuries from the shootings. We know in our hearts, this act exemplified hate towards AAPI women, which continues to play out nationwide.  We continue to be grateful for the community care that we have created locally, nationally, and globally in the wake of a painful moment in our history.  We know we must continue to build our beloved communities alongside our BIPOC allies to create the belonging, dignity, and justice we deserve.  We hope that community healing and continued work towards equity will be the first step in that direction.”

“We honor the voices of those who are not heard at these points, especially AAPI’s bodies, minds, souls, which is taken away by hate, sexual objectification, patriarchy, racism, and colonialism. We cherish their healing and justice. We extend our solidarity with Black, Latinx, Indigenous, Muslim, LGBTQ, and other communities, lifting the value of the community’s love and care for each other to fight against gender-based violence and hate.”

“These incidents go on to prove time and again that you could be a third generation American but based on how you look, you will always be othered. The objectification and fetishization of the AAPI community is nothing new, and our work to end this must go on”

“As a native Atlantan, the loss of lives in the Asian community is heartbreaking, and a year later after the March 16 shootings, I still fear for my elderly mother and myself as well as the Asian community at large. We desperately need more attention and education to end hate-based violence toward any ethnic group. I know there is more love and support in our community to strengthen and celebrate our diversity.”

“As we hit the one-year anniversary of the Atlanta shootings, our hearts at API-GBV are with the families of the victims and our community. This anniversary is just one of many anniversaries of shootings and violence against our community.  Our hope is for a world that is free of hate and gender-based violence, but to get there we must speak up and unite with our allies to stand up for justice.  API-GBV will always be here to educate, train and provide resources on behalf of our community, and finally we will always stand for survivors of gender-based violence especially when fueled by racism, fetishization and misogyny.”

[1] In a new report from NAPAWF, nearly 75 percent of AAPI women report experiencing racism and/or discrimination over the past twelve months.