Congress created important protections for immigrant survivors of domestic violence, sexual assault, and human trafficking in the Violence Against Women Act (VAWA) and Trafficking Victims Prevention Act (TVPA) in the express recognition that abusers often exploit a victim’s lack of immigration status as a tactic of abuse. Current immigration enforcement policies, including executive orders that cast a much wider net for who is considered a priority for deportation and call for increased entanglement of local and state law enforcement in federal immigration enforcement efforts, have had a significant impact on immigrant survivors of domestic violence and sexual assault. Many advocates are hearing from immigrant survivors that they have increased fear and concerns about reaching out for help. In some places, advocates are reporting a decrease in immigrant survivors contacting their agencies for assistance. Attorneys and advocates who work with survivors have reported that they are uncertain how to advise immigrant survivors about what will happen if they call the police or go to court. To better understand these concerns, a coalition of national organizations sent out a survey to the field on April 12 – 25, 2017 asking for their feedback. In total, 715 advocates and attorneys from 46 states and the District of Columbia completed the survey. This infographic shows the findings from this survey.

The Department of Homeland Security (DHS) is proposing a new rule that put longstanding policy about the meaning and application of the “public charge” provisions of immigration law into regulation form. This advisory describes provisions under this new proposed rule and how it will impact immigrant survivors of violence, particularly in light of the pandemic. 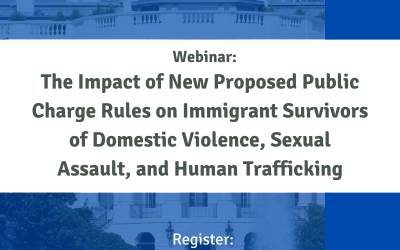 The Department of Homeland Security has posted a draft public charge proposed rule to update regulations that guide officials in determining when people seeking entry to or permanent status in the US can be denied, because they are determined to be likely to become a “public charge.” Come join us for a webinar to get an overview of the proposal, to learn about how the proposal impacts immigrant survivors of domestic violence, sexual assault, and human trafficking, and how the experiences of survivors can impact the final rule.

UPDATED Advisory: Are Victim Services Programs Liable for Criminal “Harboring” When they Work with Immigrant Survivors of Crime? 2019

This Advisory answers common questions about providing shelter and other program services to undocumented victims, describes the law and federal policy, and proposes best practices for programs

The Department of Housing and Urban Development (HUD) proposed regulations that change longstanding policy relating to immigration status verification requirements and disallowing those ineligible for federal housing assistance (i.e., members of “mixed-status” households) from residing in HUD’s public and specified assisted housing programs. This advisory describes impacts of the proposed rule on immigrant survivors of violence

In May 2019, a coalition of national organizations gathered feedback from nearly six hundred advocates and attorneys from across the United States, learning that many immigrant victims of domestic and sexual violence are now too afraid to call the police or go to court to get help. The advocates report that survivors have an increased fear of deportation, retaliation by their abusers, and separation from their children.

This chapter in the Handbook of Interpersonal Violence Across the Lifespan provides an overview of abuser risks, community-generated, and system- generated risks impacting immigrant victims of intimate partner violence and summarizes resources intended to mitigate those risks.

This survey was conducted again in May 2019. Click here for the 2019 findings